The caravanserai and Mid-way complex

Meybod caravanserai complex is an old architectural complex which used to function mainly to provide the convenience of the Passengers, the travel services, the road maintenance and the postal exchanges. This complex is located on the way of the old highway of Rey-Kerman, behind the Western gate of old Sharestan of Meybod, and from the very old time till the last 50 years has managed a very flourishing career. This complex has been actually a big caravanserai station on the way of east-west passage of Iran which from Meybod reached Yazd and Kerman from the south; Systan and Transoxiana from the East; Aghda, Nain,Esfahan,Kashan and Rey from the North; and Tisfoon and Mesopotamia from the West. This road besides being the old military and Commercial Road of the whole district has been after Islam invasion in the main way of pilgrimage to Mecca, Hejaz, Karbala and Najaf. In this station, during the past centuries and years, due to the demands and needs, different special places with special functions have been established which have been very effective in the protection and endurance of this complex. There are places such as

1-the source of Qanat and its different branches

2-the fortification of Sharestan Gate

The source of Qanat and its branches for the caravans that reached this place from the weakening desert was the first and most vital demand or need. Thus the managers of the roads had to provide the required water from whatever source possible or to build this endurance cistern. Therefore, the presence of the underground canal of Kasnava with its Pleasant climate has been the first and most essential element in the formation of this caravanserai complex. The water of this place is branched out and some of the water is sent to Sharestan and some other to the fields outside the city.
Part of the Towers, fortifications, moats and also the western gate of old Sharestan of Meybod can be seen from the Eastern side of the caravan station which is attached to it. The Close neighborhood with the city and the availability of the city facilities in the dangerous and hazardous old world have been a blessing for this station.

this caravanserai which is probably built in the place of another caravanserai is among the buildings of Safavid style and one of the most complete Mid-way caravanserais. This four-Ivan caravanserai is made of bricks and due to its various spaces, old secure fortresses, the current flowing water and its sanitary aspects is one of the unique Rabats of the whole era. The caravanserai building consists of a Sabat (with a lierne vault), external Ivans and octangular entrance, central Courtyard, pond-house and terrace and four beautiful rectangular rooms on four corners, Eastern and western roofed spaces and all together 100 Rooms and Fireplace Hearth for the Passengers of the caravans. 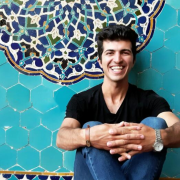